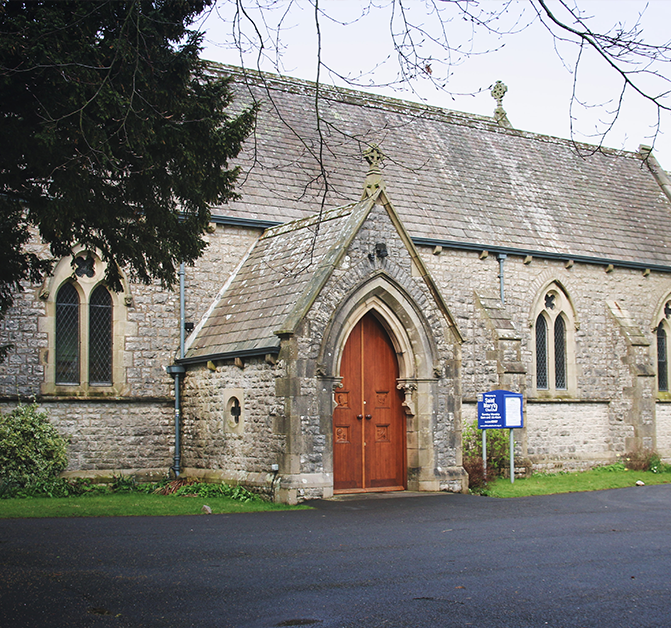 Standing proudly on the land known as Little Templand at the highest point of the parish of St Mary, Allithwaite, the church commands a fine view over the Kent estuary. It was built together with the old vicarage, the school and the schoolhouse from the proceeds of the will of Mary Winfield Lambert, a local landowner who lived first at Abbot Hall, Kents Bank, and then at Boarbank Hall.

She died in 1857 but the buildings (at a total cost of £6,000) were not erected until 1864. She is remembered in the Mary Lambert Hall which stands between the church and the school, a modern facility serving church, school and community. The church was consecrated by Dr Samuel Waldegrave, Bishop of Carlisle, on 29th June 1865. Prior to that date Anglican worship in the district had centred for centuries on Cartmel Priory.

The architect of St Mary’s was E.G.Paley of Paley & Austin, who designed many churches in the Carlisle Diocese over a period from the mid 19th into the 20th century. He favoured the hammer-beam roofing style, but the roof of St Mary’s is of the simpler collar-beam structure. Curious carved stone heads here and there on the walls like mock corbels are intended perhaps to give the church a false hint of the mediaeval.

The builder was James Akister, born in 1823. His firm also built Grange Railway Station and much of the main street of Grange-over-Sands. These developments came about because of the arrival of the railway from Lancaster in the mid 19th century which led to the expansion of Grange as a holiday resort and the grand stone-built houses which characterise the town today. Members of the Akister family, some still involved in the building trade, still live locally. 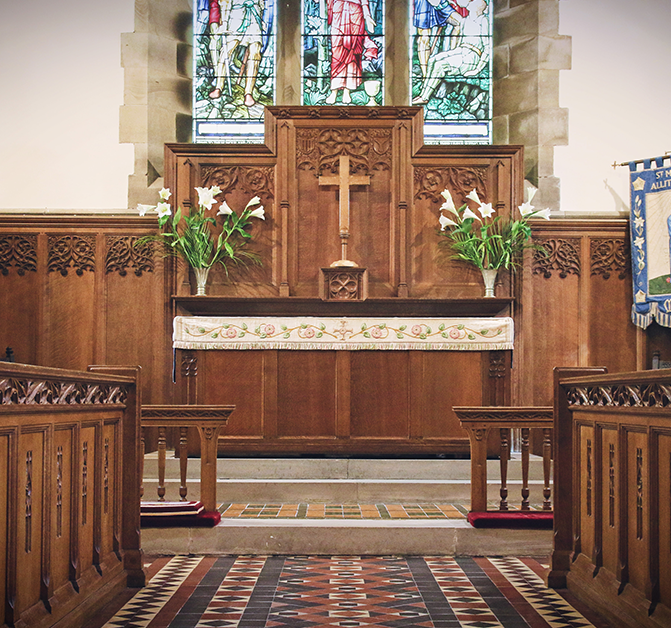 This period coincided with an extensive programme of church building all over England. Following the evangelical and high-church revivals there was expectation that every citizen would want to attend public worship. As part of this movement the ancient parish of Cartmel was divided into the parishes which have now rejoined to form the Cartmel Peninsula Team Ministry.

Our adult congregations today are surprisingly larger than they were seventy years ago, but before the inclusion of Kents Bank the population was of course less. We cherish our close link with St Mary’s School next door where the clergy are frequent visitors and members of our church are involved as governors.

Today in rampant secularism we are rightly more concerned about mission to people than maintenance of buildings but St Mary’s Church remains dear to the hearts of those to whom it is a spiritual home and it carries the memories and memorials of those who have cherished it in the past. It contains some fine examples of wood carving by Tom Knipe and his son Ken who between them spanned a period of 80 years as village joiners and undertakers, with two further generations now following at the busy sawmill on Church Road. Ken Knipe’s work can be seen in the outer doors, the font cover, a round table in the children’s corner with a carved snail hidden underneath. The double doors leading into the vestries were made by Tom Knipe, Ken’s father who also made the communion rails in the Lady Chapel.

The Organ
The present organ was installed in 1909, replacing an older instrument. It was manufactured by Albert Keates of Sheffield who provided organs for several local (non-conformist) churches.

The Windows
At the end of the 1914-18 war there was much discussion about a suitable memorial to the men from the parish who had given their lives. In 1920 a decision was taken to replace the original plain east window with a fitting memorial in stained glass. It was installed by public subscription in 1922. We have no written record of who the artist or makers were but the other windows in the church are signed by Abbots of Lancaster who are no longer in business.

The striking east window picture is symbolic rather than biblical. It shows Jesus robed in red as captain of the host. His hands and feet are scarred with the marks of crucifixion indicating that he is the risen and ascended Lord. He is surrounded by men in Roman armour, representing perhaps the soldiery of all ages descending a rocky path from the mountains. These would seem more representative of the heights of the Lake District than the plains of France

The Lady Chapel window is a memorial to those who died in the Second World War. The theme here is the Resurrection, depicting the women who came to the tomb. A dramatic burst of light outshines the garden vegetation and invades heaven beyond. There are also smaller memorial coloured windows in the chancel.

Coronation Relic
Following the coronation of Queen Elizabeth in 1953 the various hangings which adorned Westminster Abbey for the occasion were offered for use in churches around the land. Some were offered to the Diocese of Carlisle and St Mary’s was fortunate to be allotted the material which now fronts the communion table in the Lady Chapel.

The Refurbishment
The church underwent a refurb in 2011, thanks to the legacy of parishioner Tom Howard, has created a warm, inviting and comfortable interior without detracting from the best features of the building. It is now far better equipped and adaptable for mission and service to modern society.